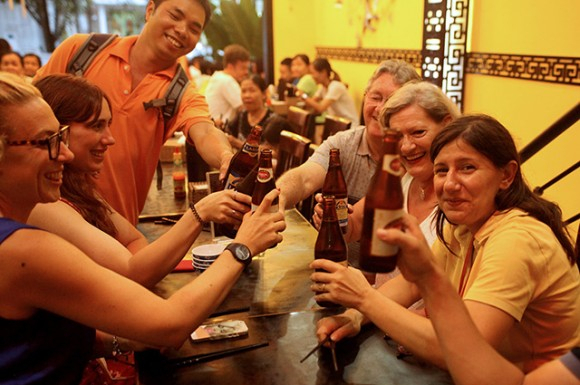 ATA-VA-HAN VESPA TOUR | Streets and Eats of Hoi An

‘Taste the flavours of Hoi An’

Immerse yourself in the vibrant Hoi An dining scene, riding pillion on a vintage Vespa along the riverside and through alleyways and busy streets, tasting the best local dishes and street food. Free flowing drinks and food included, so bring a healthy appetite!

Highlights: This tour is perfect if you like: cuisine, nightlife, people, local life, hidden gems.

‘Experience the countryside vibe of life in the slow lane’

Weaving down trails into quiet villages, along waterways of the stunning countryside. A lush landscape awaits as you meet the people and families that live peacefully away from the hustle and bustle of town. 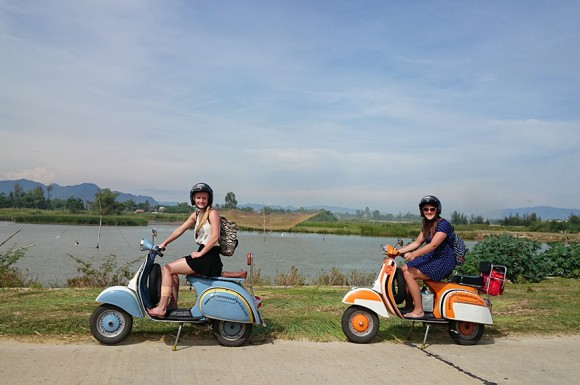 Escape the old town and take backroads to the beautiful islands and villages surrounding Hoi An riding pillion on a vintage Vespa. Explore the magnificent countryside 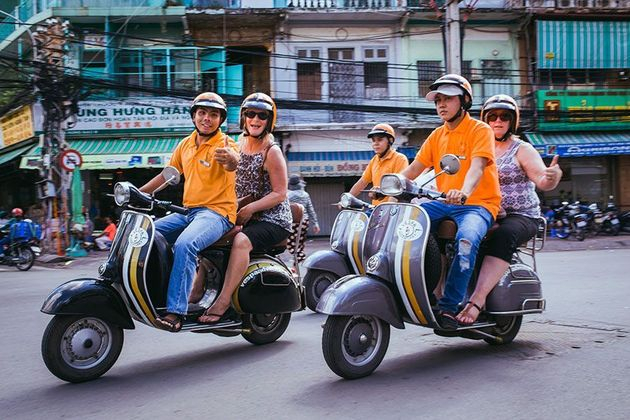 ‘Discover the hidden gems of Saigon’

Experience the excitement of modern day Ho Chi Minh City riding pillion on our vintage Vespas. Get off the crowded tourist trail to visit some fascinating places and sites than you could never find on your own. 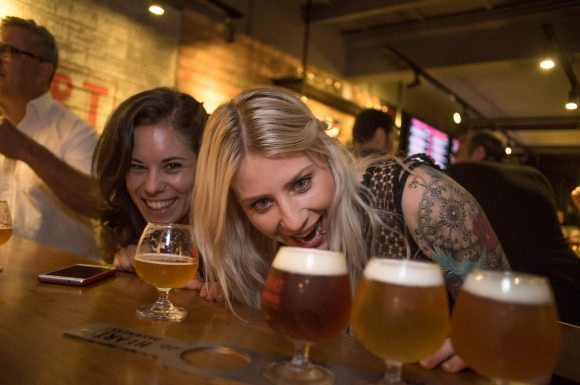 Ride with us as we introduce you to the latest craze sweeping the bustling metropolis of Saigon, the craft beer brewing scene! Let our drivers negotiate the busy streets in between breweries as we tantalise our tastebuds with expertly crafted beers and magically matched food pairings. 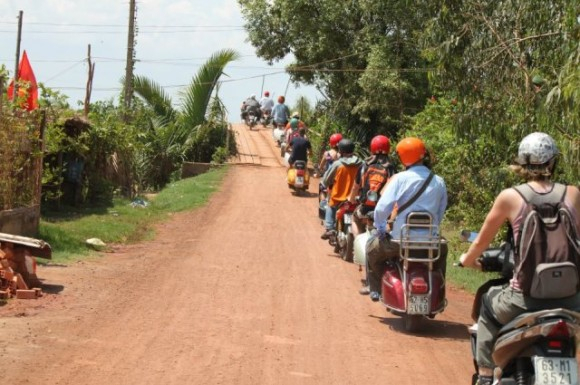 ATA-VA-GMK VESPA TOUR | A Glimpse Of The Mekong

‘Explore the backroads of the Mekong’

Escape the concrete jungle of Saigon as you ride pillion on our vintage Vespas along the red clay trails of this lush countryside. We criss-cross the river & waterways of this striking verdant landscape taking in the local culture as we go. 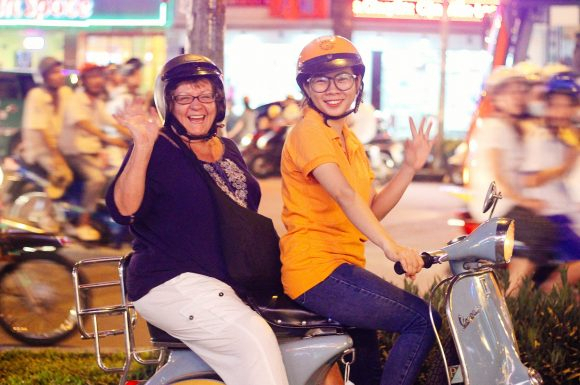 A foodie night out on the town.

Experience the local nightlife and enjoy tasty food and live music as we ride pillion on vintage Vespas along the busy streets of this vibrant city. See Saigon come alive at night on this after dark adventure! 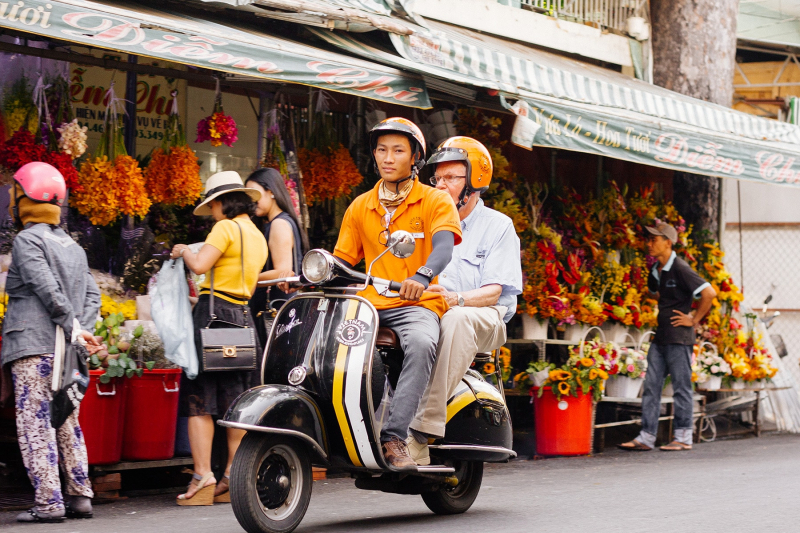 See a Saigon local’s lifestyle: Experience the excitement of modern day Ho Chi Minh City riding pillion on our vintage Vespas. Get off the crowded tourist trail to visit some fascinating places and sites than you could never find on your own. 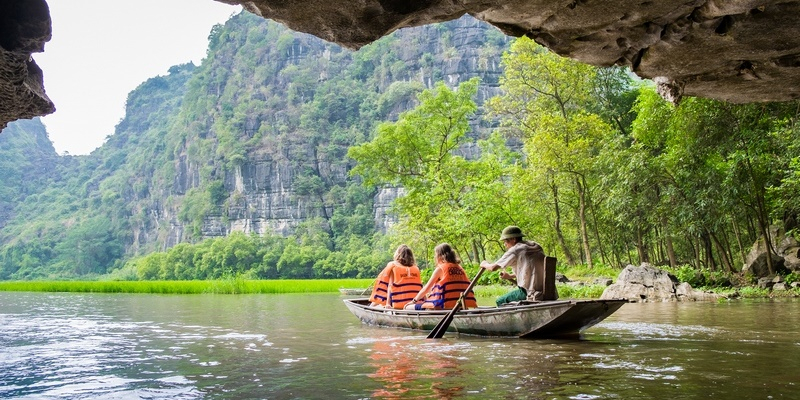 Hoa Lu is some 110km or 2.5 hour bus from Hanoi. Located near the Ninh Binh city, Hoa Lu is the site of a 10th-century capital of an ancient Vietnamese Kingdom called Dai Co Viet. This small Kingdom covered an area of only 300 hectares, and reigned from the 10th century, during the Dinh and Le dynasties, to the 11th century, during the Ly Dynasty. The Kingdom was enclosed by a citadel. The citadel and the Yen Ngua limestone hills provided good defense of this kingdom against the invaders.

Not much of this ancient kingdom is left standing. There are two 17th century temples, modelled after their 11th-century originals that are on most itineraries to Hoa Lu. They are the Dinh Tien Hoang Temple (King Dinh temple) and Le Hoan Temple (King Le Temple).

You will have chance to visit of the Hoi An market, where you will discover the exotic fruit and vegetables of Vietnam that are used in our cuisine. We will discuss the numerous culinary and medicinal uses of the spices and plants that we will find for sale throughout the market. Then continue to join a Cooking Class by Grandma to explore how to make 4 typical dishes of Vietnamese Cuisine